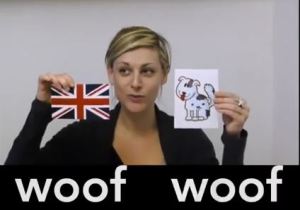 Truth be told, I’m really keen on bizarre people. My favourite participant on the reality TV show, Big Brother, was a Welsh woman who said her favourite hobby was ‘blinking’. I mean – BLINKING, BLINKING, it’s a biological impossibility not to blink, how can that be a hobby?

And then, in Vietnam I met a British guy who told me his favourite pastime was to make animal sounds, so he spent the next 3 hours entertaining me with a lot of woof woofs, cluck, clucks, eeaw eeaws, and a cock a doodle do or two. It was hilarious, but not as hilarious as the next night when I hooked up with him and some other people from different nationalities and I found out that animals don’t make the same noises in different countries. OMG – I kid you not!

Don’t believe me? Well, check out this video