Remembering word patterns is very important if you want to improve your spoken and written accuracy. Personally speaking, the most effective way to do this is to read. However, to get you started here are a few word patterns to help you think like a police officer or a criminal. 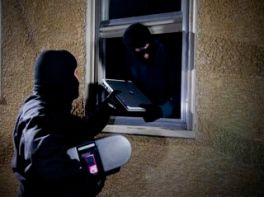 For example: on Saturday night, the local police arrested three youths for burglary. They were accused of breaking into a house and stealing a laptop, a digital radio, a mobile phone and a flat screen TV and  a cuddly toy. The three suspects claimed that they were not guilty of committing this crime. However, the police officer in charge said that although they might deny burglarising the house because they were caught on camera leaving the house with the stolen goods by a neighbour, they are bound to be found guilty of the crime in a court of law and will be charged with theft.